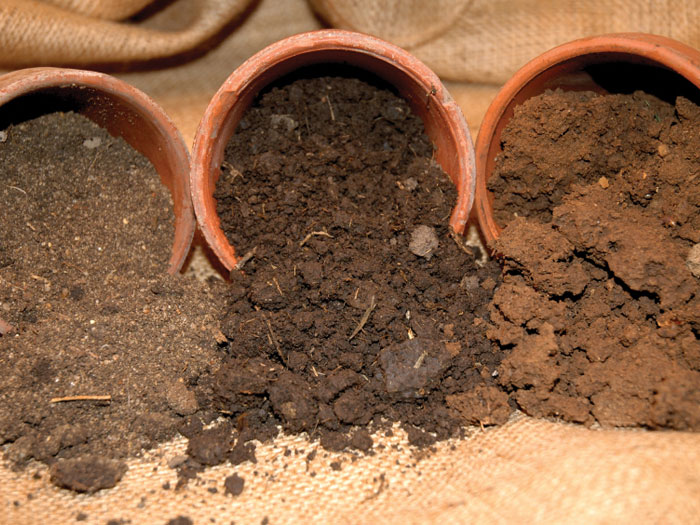 Sandy soil (left) and sandy loam soils (middle) expand and contract very little with moisture changes. They can be very reliable when supporting a foundation.

Clay soils (right) expand and shrink in volume dramatically with moisture changes and can cause significant foundation damage.

Water passes through sandy soils rather than being absorbed. This fact makes sandy soils very stable. Instead of expanding as they absorb moisture and contracting as they dry out, sandy soils maintain a fairly consistent volume and density.

How Clay Soils Affect Your Foundation

Soils rich in clay and silt have the greatest potential to damage a foundation. Clay absorbs water easily, expanding in volume as it becomes more saturated. So-called “expansive clays” can cause foundations to crack, heave and shift.

When clay soils dry out, they shrink and crack, leaving gaps around a house where water from the next storm can penetrate easily and deeply to repeat the expansion cycle. Clay-rich soils usually cause more foundation damage by expanding than by contracting.

Loamy soils are usually a very stable soil that shows little change with the increase or decrease of moisture temperature.

The primary concern with foundations built on loamy soils is erosion. When soils underneath your foundation erode, they may begin to be inappropriate strata for sustaining the weight of a foundation and home structure.