Plumbing tests are the first step in determining whether or not you have a problem with your plumbing. An undetected leak, or an un-repaired leak, that is left under the slab foundation of a home can cause a structural problem if left untreated. Those structural problems can lead to the need for foundation repairs.

The best way to keep on top of your plumbing and to be proactive in spotting un-repaired leaks is to have plumbing tests done at the following times:

The plumbing test that we perform to determine if you have any leaks is called a “hydrostatic test”. It checks both fresh water and sewer systems, or domestic and sanitary, respectively.

In order to perform the test on a domestic system, a pressure gauge is installed on an outside water spigot. The spigot is then opened and the gauge pressurized by the flow of water. Following the pressurization of the gauge, the water supply valve is turned off and a check of the gauge is then recorded to see if there is any loss. If there is a loss, you have a leak; if there is no leak, the plumber will write on the report that there is no loss, water held at a certain psi for a the amount of time that the test was performed, which can vary between 10-30 minutes. If this test fails, the next step in the repair process is to perform a domestic system leak location.

Many people ask why this test needs to be performed, as they feel they would know they would have a leak based on the rate of water usage. While this can be true for the domestic system, the same can’t be said for the sanitary (sewer) system. There is no meter on the sewer system as it is what is leaving the house, as water companies would not get much business if they not only charged for water coming in to a home, but leaving as well.

A test on the sanitary system is performed by plugging the main drain line using the access provided by a clean out with an inflatable air bladder commonly called a test ball. After this is accomplished, the sewer line is filled to slab level*. Once this has been accomplished, a process similar to the domestic  test takes place and the report will read as the previous test did, however this test normally takes between 20 minutes and one hour. If this test fails, the next step in the repair process is a sanitary leak location.

* Note that depending on the height of some clean outs, an extension may be needed.

The first step in performing this test is to shut off the water on the sprinkler system if applicable as well as turning off the water supply to the house at the main line cut off valve. At this time the plumbers need to determine if it is on the hot water lines or the cold water lines under the house. After turning off the water at the meter, air is pumped through the lines in order to push any remaining water out so that the plumbers may use a special piece of equipment called a ‘Geophone’. This is used to listen for any escaping air or water as it leaves the house.

This part of the leak location involves a hydrostatic process of elimination by breaking the system down into smaller parts using a series of different side test balls and air hoses. Once the section(s) of the houses’ sanitary system that is/are determined to have leaks, the second step in the process is to run a sewer camera to visually inspect the pipes to locate the size and location of the leaks. This particular test makes use of the clean out, which is the same as the sanitary system hydrostatic test.

Why do I need to repair the leak?

Aside from getting your water bill back to normal if you have a leak in your domestic system, getting the leak repaired is essential to the structural integrity of the house. When water gets below a slab and stays there, it will compromise the foundation that the house sits on, which can cause all sorts of cracks, slanted floors, and doors and windows not opening and closing. If you have a warranty on your foundation from work being done, just remember: it’s not acknowledging and fixing the leak that can be detrimental to your warranty, it’s knowing you have a leak and not doing anything about it that isn’t good. 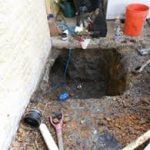 Of the two ways to get to a leaking point, tunneling is not always the best method. On average the plumber will create a 3’x3′ hole from the outside and tunnel to the pipe that is broken. While this isn’t generally the best way to get to fresh water leaks, it can be used to get to sewer system pipes. 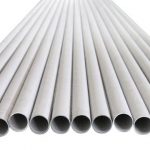 After the damaged pipe has been exposed – physical pipe repair then commences and the damage lines/fittings are replace with schedule 40 PVC line- this is the industry standard*.  After the repairs are complete, another hydrostatic test is always ran to insure the recently repaired lines are no longer leaking and that the system integrity is now 100%.

Before or after foundation repair

Fixing a leak is best reserved for after foundation repair. Sometimes the foundation lifting can cause more plumbing issues. Most foundation companies have it stated in their general conditions that they are not responsible for any leaks that result from work done on the house. We recommend contacting the foundation company that holds the warranty in order to determine the best course of action. For example, MBR Guaranteed Foundation Repairs will want to locate the leak, then send out a representative before the leak is fixed.

What is a Clean Out

A Clean Out is a part of the sewer plumbing line that people use in order to conduct plumbing tests and clean out blockages in the sewer system. The Clean Out is a piece of pipe that sticks out of the ground generally 3-4 inches, and is usually located near the front of the house, often in the flower bed. On occasion, a house may have an additional clean out located in another area, but the most commonly used is the one in front of the house.

Locating a Clean Out

Installing a Clean Out

If there’s no Clean Out on the property, the plumber will have to install one in. The process of installing a Clean out is much the same of locating one. The plumber runs a camera in order to find a suitable place to install the Clean Out. This also involves finding the front yard pipe to reduce the amount of excavation need. The plumbers then install a new piece of piping to match the existing plumbing.

Furthermore, plumbing leaks beneath your home can also cause the same problem. Leaks slow enough not to notice on your water bill can still damage your foundation. Texas summers aren’t the only time you’ll get plumbing leaks and need foundation repairs. Therefore, we advise you ensure your home has proper drainage. Make sure no water pools around the foundation for at least 6 to 10 feet. Your gutters should drain onto splash blocks. Splash blocks move runoff away from your foundation and helps control unsightly erosion. We also recommend that you have your plumbing checked regularly to catch any leaks as early as possible.

Whether you are a homeowner or a realtor with deadlines, we are determined to make the repair process meet your every need. Contact us now and let’s get started!